RESPONSES IN SCHOOLS TO SAHAJA YOGA MEDITATION:
(the text and audio quotes are from high school students, staff and assistants in New York City; most of the photos are from Morocco and Austria)
Students say:
~“Wow, that was really cool!”
~“The exercise we did basically helped me forget all the negative things that were in my mind. I feel more relaxed and more comfortable.”
~“Do you think itʼs possible for someone to be born connected to the universal collective consciousness?”
~“I got my attention focused, it was great – Iʼm going to do it at home.”
~“Iʼve been doing Sahaja Meditation for three weeks now. It calms you down, itʼs relaxing, it gets you ready for class.”
~“I felt upset when I started, sad and mad at the same time, now I feel OK and good.”
Teachers say:

~“I ran a Sahaja Meditation class as part of a mind, body, spirit seminar. Later, I asked the class for a thumbs up, thumbs down on the meditation, and the vast majority raised their thumbs up. I definitely want to do more in the New Year. ”
~“I am absolutely amazed. If youʼd told me this morning that some of my students, who canʼt keep quiet for 30 seconds would sit here in deep meditation for 10 minutes, Iʼd have said you were crazy. I want to learn Sahaja Meditation too.”
~“Some of the kids whoʼve been coming to the meditation class are quite difficult, one has been on suspension, and one has learning difficulties. Other teachers, without knowing why, have commented on the change of behavior of theses students after just one meditation session. The first week we had 21 students attend, and the second week it was 27, so theyʼve been telling their friends. Iʼm really surprised to see some of the students whoʼve turned up.”
~“Iʼm amazed at what Iʼve seen here today. I want to learn to do this meditation myself.”
Health Corps coordinators say:
~“After speaking with students afterwards, more and more keep coming up to me and telling me what a wonderful experience it was for them. Their minds were cleared of so many different things and they felt rejuvenated and revived! I will never forget the experience and think it is something that will live in my mind for quite some time. Who else can say that they got almost 60 teenage students to sit quietly with themselves and their thoughts (or absence of thoughts) for more than 30 minutes? THIS was POWERFUL!” 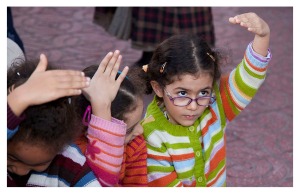 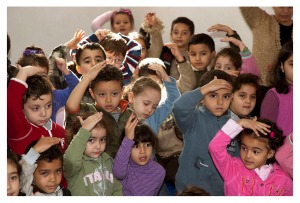 ~One girl, about 15, went into meditation for ten minutes and then said, “This is fantastic. This is SO right for me.” Then she ran off and came back with a friend, sat her down and told her, “OK, close your eyes, take your attention up above your head, stop thinking and forgive everybody.”
~One of the other stallholders, when asked if she wanted to learn how to meditate, asked “What makes you think I don’t know already?” She sat down and started swaying around on her chair. Someone helped her achieve an improved inner balance, then she calmed down and stayed in deep meditation for 15 minutes. When she opened her eyes she said, “This is different to anything I’ve ever tried before. It’s so simple and practical and effective. I definitely want to pursue this.”
~At a high school in the Bronx, at the first of a six week meditation class, the group, including the chemistry teacher, finished their very first Sahaja Meditation with a collective, “Wow!” The teacher later mentioned that everyone really enjoyed the experience.
(At one school in Brooklyn where a regular class Sahaja Meditation class has been running for nearly six months, some students are now moving on from the basics of learning to meditate in mental silence, or “thoughtless awareness”, to being able to balance their own subtle energy system, which means in effect, changing a bad mood into a good one.)
**********************************************************************
And – not to suggest there are any similarities between school and prison! – here is some info about meditation in prisons….
http://www.prisonmeditation.net/
Positive report from the Commonwealth Human Rights about Sahaja Yoga Meditation programs in Indian prisons:
Sahaja Yoga Meditation has been taught in the Tihar prison since 1997.
A report from the Commonwealth Human Rights studied the effects of the intervention of 129 NGOs in Indian jails. About Sahaja Yoga Meditation, it acknowledges the help given by this method to the prisoners, and the fact that over one hundred prisoners from Tihar wrote a testimony to explain the benefits Sahaja Yoga Meditation brought them, reporting improved physical, mental and emotional conditions.
(Rights Initiative report from 2008 about NGO interventions in Indian jails)