Atomic theory is an ancient science. The earliest record of it can be found in Vedic texts from india which are many thousands of years old.

Legend has it that the Vedic civilisation was highly advanced. The sages that oversaw its development, through their mystic insight and deep meditation, discovered the ancient symbols of spirituality: Aumkara and Swastika. They also discovered many scientific principles that they applied to develop a highly advanced technology. They gave the atom its sanskrit name “Anu”.

While the technical achievements of this ancient civilisation have been forgotten the archetypal symbols of spirituality have maintained their eminence in our consciousness. Now, thanks to advances in modern atomic theory, the atomic basis of these divine symbols can be appreciated.

Western theories of the atom took shape in the 18th and 19th century. At the beginning of the 19th century, John Dalton theorised that an atom was an indivisible particle of an element. However, after the electron was discovered in 1897, and then the proton several years later, the atom model was revised. In 1909, Ernest Rutherford showed that atoms were mostly empty space, revising the model of an atom to a tight positive nucleus containing the protons and neutrons with electrons around it; by 1913, Danish physicist Neils Bohr envisioned a planetary arrangement in which the electrons orbited the nucleus at different energy levels.

The current way of describing an electron is a model called the charge cloud model/quantum mechanical model/orbital model. This model based on the idea of Heisenberg’s Uncertainty Principle, which states that we do not know the precise location or the velocity of any given electron. The model uses indistinct and overlapping “probability clouds” to approximate the position of an electron.

Where a cloud is dense, the probability of finding an electron in that vicinity is low. In this model, each electron energy level is denoted by numbers that take concentric shells as suggested by the Bohr model because there are overlaps in the ordering of the energy levels.

In the case of the carbon atom the electrons occupy four tear drop shaped clouds in a tetrahedron-like arrangement. These clouds represent the areas in which the electrons spend most of their time. They move so rapidly in this zone that they form a cloud rather than a specific flight path

Recently a number of researchers have suggested that within these clouds exist specific zones that the electrons favour. These zones form a spiral around the surface of each of the tear drop shaped clouds.

This new development came into the attention of a great Indian saint and mystic. Disciples were encouraged to develop the principle as it related to the carbon atom.In deep meditation one of those disciples, who was a chemist,spontaneously realised the true significance of this theory:

The electron’s high probability zone formed spiral standing waves around the carbon atom’s nucleus. When this configuration was viewed from certain angles the physicist was surprised to find that the spirals formed recognisable symbols.

In the first view a 3–dimensional Aumkara could be seen. From a different angle that Aumkara became a flat, 2-dimensional Swastika. The Swastika, he concluded, was actually 2-D representation of the 3-D aumkara.

All people, objects and even energy itself are expressions of the same divinity that so many religions, cultures and philosophies have tried to claim exclusively as their own.

The Carbon atom, by containing within it these universal symbols, demonstrates that matter is a manifestation of the same Divine consciousness experienced by the saints and sages of all history. Matter is innately spiritual.

The Universe does not exist separately from the Universal Consciousness; it is a direct expression of it.

Living matter, which is carbon based, must have a unique role in this expression. A saint is one who lives in eternal experience of this all pervading divine purpose.

All people, objects and even energy itself are expressions of the same divinity

The alpha and omega are traditionally ascribed to Christ. In india the Deity called Ganesha presides over the Swastika and Aumkara.

There are some remarkable similarities between the two:
Both deities demonstrate the value of childlike innocence; Ganesha is himself an eternal child famous for his simple wisdom ;while Christ, son of god, often exhorted his disciples to “be as little children”;

They both are divine children; both conceived immaculately;, both divine sons of a holy trinity (Christ is the son of Yahweh and The Holy Spirit/Mary and Ganesha son of Lord Shiva and Mother Parvati).

Are Ganesha and Christ the one and the same deity?

Thus the distinction between Eastern and Western spirituality, like any division based on race,culture or belief, is no more than ignorance of the true spiritual nature of the universe and all that exists within it. 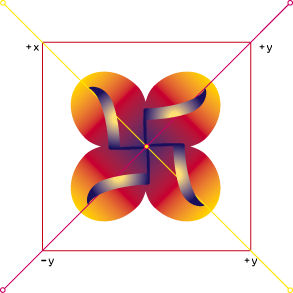