That’s what happened to all the saints who came on this earth? 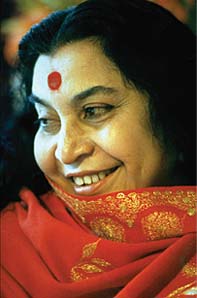 ” I am a very ancient being – the problem is like this. [laughter] I had to… what can I tell you about Myself? I just don’t know what part will interest you, but only thing I can say that I was born with this understanding and awareness that I have to find out a method by which I could give en masse Realization to people. I was a Realized Soul, of course. I knew all about it from My very childhood. But the problem was that how to make many people get it, because if one person gets it or one person has it; if one person is an incarnation, people don’t understand it. Not only that but they may even try to destroy such a person. That’s what happened to all the saints who came on this earth. Christ was crucified; Mohammed Sahib was given poison – because they were ignorant. They did not know what it was, what was He saying.
So, it was important first of all to find out a method how to give them en masse Realization, and from that angle I just thought that ‘this is why I am on this earth and I have to do this job’ for which I wanted to study about human beings. I took My birth in a Christian family and that too a family which was Protestant family, because I felt that Protestants are fanatics but very sophisticated. [laughter] And, they rationalize everything to such an extent that nobody can see beyond it. So, I better take My birth in them. And My father and mother had already taken birth whom I had chosen as My parents. They were great people, realized souls and specially My father was a person who knew why I was on this earth. Even My mother knew about it.
So, a special rapport was between them and Me and they could understand why I was busy meditating or finding out about how to give realization to others. Then, I would say My father was a very learned man, who knew about fourteen languages, who translated Quran-e-Sharif into Hindi, who was a member of the Constituent Assembly. He made our Constitution. Also, he was the only Christian to be elected in those days. And, then My mother was a honors in Mathematics. All very well-educated and nice people!
They dedicated their life to the cause of freedom of India. And, I also felt that that was very important, because if we are not free we cannot do anything on religious basis. There’s one thing is to be free from this slavery. And, that’s how I also helped them a lot and our whole family suffered a lot. And, I went through terrible times, terrible times since very young age.
I was with Mahatma Gandhi also because he liked Me very much as a child. So, I stayed on with him then I used to come back to study again, go back to him. He used to call Me “Nepali” because My face is a Nepali face. And, he used to talk to Me as if he is talking to his grandmother sometimes. [laughter] It was very sweet and he was a very sweet man – extremely sweet person to children. Very strict with himself and strict with others – elderly people – but with children he was very, very sweet and kind and would try to learn from children lot of things. It was surprising how he understood that there’s lot of wisdom with the children sometimes than with the older people who are mixed up.”
Shri Mataji Nirmala Devi    October 1, 1983    KAZU Radio Interview    Santa Cruz, Ca.  USA