Bach and the cosmos 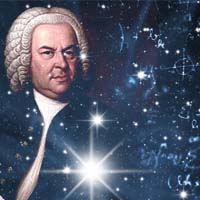 “After all,” he says, “no one in Bach’s day turned up at the Thomaskirche in Leipzig to listen to Bach. They were a Lutheran congregation dedicated to asking themselves hard questions about their place in the universe.”

For over 30 years the Orchestra of the Age of Enlightenment has combined highbrow musicology – using period instruments – with a tremendous sense of mischief:  The idea that Bach’s music is a kind of transcription of the divine cosmic order has been popular since the composer’s death in 1750. But this concert takes things further, as the climax of a season that marries Bach’s music to lectures in cosmology and physics. Crispin Woodhead, the chief executive of the orchestra, calls it “a truncated version of the sort of Lutheran service for which Bach wrote his cantatas”.