A religious idol is not the same as an image 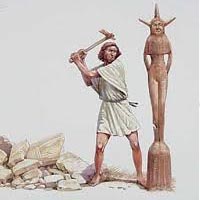 However, the term ‘idol’ has come to be used in a wider connotation and need not necessarily imply an image or symbol; it can also mean a cause or idea. It is natural for man to give his allegiance to pure Being or a symbol of Being. When he ceases to do so he can either live for mere pleasure and convenience, like an animal, or switch his allegiance to some substitute, and this is idolatry, whether the substitute is in the form of an image or not.

The lowest kind of idolatry is the worship of some other human being, some Hitler or Stalin or Mao Tse Tung, because worship of the human degrades one to the subhuman level. This does not apply, of course, to a disciple’s worship of his Guru, because it is not the human but the superhuman that he is worshipping in the Guru; he is not worshipping him as a man but as a manifestation of the Divine.

Nationalism is a powerful modern idolatry.

Most men require some emotional attachment, and as religious attachment has faded out, first in the West and more recently in Eastern civilisations also, nationalism has grown up to take its place. It was unknown in the ancient world, practically unknown until the Reformation dissolved religious attachment in the modern West. What might look like nationalism in ancient times ‹ in China, Japan, Israel, Egypt, for instance ‹ was quite a different phenomenon: it was attachment to a civilisation and way of life based on a religion. The Ancient Greeks felt a loyalty to their civilisation, as many Europeans do to theirs today, but politically they were a group of warring states, as modern Europe is not. The Romans were a city-state that expanded into a bureaucratic empire. Devotion to a territorial unit within a wider civilisation, devoid of any spiritual or profoundly cultural identity, such as a modern nation, is pure idolatry. It is acceptance of a worldly instead of a divine allegiance, and that is the very definition of idolatry.

In this case the emotional and materialistic aspects of allegiance outweigh the intellectual. Intellectually the great modern idolatry is science. When someone says that science agrees with such and such a religious tenet, the usual implication is that science is true and religion is to be accepted on sufferance as long as it does not disagree with it. That is to say that it is really science in which the speaker believes, not religion. It depends on the attitude of mind from which the statement is made. It is possible for someone who understands the Eternal Dharma to say that nuclear science is coming nearer to the Upanishad’s teaching of primordial nature as formless substance or energy, meaning thereby that within its own domain (the domain of prakriti, for Purusha is beyond it) science is correcting its former errors and penetrating farther than hitherto; but more often such statements are an attempt to shelter religion, of which the speaker is not certain, behind science, of which he is or thinks he is.

Psychology is only one branch of science.

It is becoming fashionable in the countries which used to be Christendom to go to one’s psychiatrist as one used to go to one’s father confessor to have one’s problems in life straightened out and one’s emotional scars healed. Both in theory and in treatment psychology is replacing religion. Those who understand the ancient Guru-disciple tradition see that psychology is a truncated counterfeit of it. Just as physical science can attain only to prakriti without Purusha, so psychology can only to the subconscious without the superconscious (spirituality). Some psychologists are indeed coming to suspect and some even to admit openly that there is a superconscious, but that is not enough. What is needed is to have access to it, to have traversed it in oneself and to be able to guide the aspirant in doing so. Treating patients on the psychological level without access to the spiritual may produce a superficial amelioration or an aggravation but can lead to no permanent cure. And yet when true reverence for a religious intermediary is lost, idolatrous belief in a psychiatrist comes in its place. The late Dr. Jung, for instance, one of the most conciliatory of the famous scientists towards religion, declared that at the root of the trouble of all his patients of over middle age was lack of ‘numinous experience’ i.e. religion. He could observe this but could not remedy it since he himself had no religious power or experience to draw upon until his old age.

In the modern hall of idols art also has its place. People speak with superstitious awe of music, painting, poetry, regarding their creators as some sort of divine intermediaries. Where the artist has self realisation (such as Michelangelo, Gaugain, Mozart, Handel or Picasso) they may indeed be, but not in the clamorous intellectualised, ego-assertive works of today. Traditionally the artist was often no different from the craftsman ‹ not that art was less inspired but craftsmanship more. In some cases he was an ordinary workman who in the evening after his day’s work repaired to the temple or cathedral to serve God in creating forms. In some he remained anonymous. Even when known and honoured, there was not the idolatrous glorification of today. Whereas in fact the spiritual authentication of art has been lost, the claim based upon it has been exaggerated beyond measure. An artist is spoken of as a specially dedicated sort of man, when often enough it is only his own petty concepts fame or success that he is dedicated to; apart from that he is simply a person with one type of ability more highly developed than in most people.

A similar claim is made for the scientist, the historian, the research scholar: an austere, passionate dedication to Truth. But here again there is a false attribution. The ‘Truth’ they seek is in fact seldom worthy of a capital letter, being for the most part merely factual. Spiritual Truth transmutes the nature of its seeker. To discover is to experience it; to know is to be united with it. The relative truth of science and research, on the other hand, leaves a man the same narrow individual he was when he started, with the same faults and limitations. And when scientists are faced with some truth contrary to their presumptions, some display of unexplained powers, for instance, or some religious phenomenon, in few enough is the dedication to truth sufficient to make them admit it. The usual attitude is to look the other way and refrain from seeing it.

While the divinity of Truth is turned to an idolatry of science and learning, e.g. divinity of Union is turned to an idolatry of sex. In film and fiction the union of man and woman is endless represented as the inspiration for effort and the sublime achievement. And from the start, this idolatry goes hand in hand with actual degradation. As in art these extremes survive when the true, based on divine symbolism, has been lost.

There are other idolatries also in the modern world. Social service is one. Help people who come one’s way by all means, but to make a profession of helping them materially while neglecting both oneself and them spiritually is an idolatry. It is only a branch of the greater idolatry of humanism. The human is worthy of adoration, study, service, insofar as it reflects the divine, insofar as ‘in doing it unto one of the least of these ye do it also unto me’. The true bhakta serves men because he sees and serves God in them. Humanism is an attempt to deprive the human shadow of its divine substance and still find it worshipful.

‘Those who understand the ancient
Guru-disciple tradition see that psychology
is a truncated counterfeit’
Communism is not merely an idolatry but a complete idolatrous religion which will brook no other, no sharing of allegiance. That is why it condemns religion, nationalism, sex adulation, and regiments art and psychology.

But perhaps the most pervading idolatry of the modern world is its worship of itself. Just as the rootless individual of modern times is left with only himself to worship and becomes a natural egoist, so the modern world itself endlessly extols itself knowing nothing more stable or profound. The very word ‘modern’ has become adulation when it should be condemnation. To say that a thing is ‘modern’ is taken to mean that it is excellent, unencumbered, serviceable; in fact it means that it is meaningless, symbolising no higher reality.

Religion is not a department of life; life is a department of religion. If there were a true religious community, civilisation including politics, art, education, marriage, learning, social organisation, would be manifestations of it in the various departments of life. To make any of them independent and self-sufficient is to make it an idolatry. Our modern world is a world of idols, an idolatrous world. No individual can change this. Even the seeker must outwardly conform to it. What each person can do is to reject inwardly the sense of values that it implies and remember that, for himself, there is only the Self to be attained.