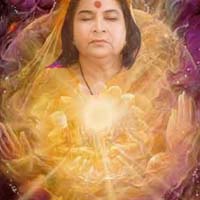 How we think about things changes as the fashions of thinkers of that era.

Shri Mataji Nirmala Devi, probably the greatest yoga teacher of the 21st century, described the Adi Shakti as the primordial Mother, an intelligent force that works out the evolution of human kind and all that is needed to bring that evolution into fruition. Shri Mataji Nirmala Devi describes this force as famine as it nourishes, nurtures and matures mankind from the animal stage to the human stage and beyond that into a more spiritual collective being. First to create the world and then to create human beings through the evolutionary process. After that, to comfort. Then to counsel. So many incarnations, philosophers, seers, saints, those people who had a mission to improve the society both socially and spiritual were born of that nature to guide evolution on a collective spiritual social path, counselling the people. They told what was wrong, what was right, what should we do, what we should not do, what is self-respect and what is the duty of a human being as a superior-most creature. So many of Them came on this Earth. One after another, in every country, They came and Their counselling formed religions. Of course, you see the mess of the religions and that’s how Their life was wasted, that They formed religions after religions, by which only human beings were divided, divided to such an extent they hate each other. Hateful, somebody’s born in an X religion, he hates the person who follows the Y religion.

While Those who came as counsellors talked about complete unity, complete oneness of human race, despite that, human brain, in its freedom, did all kinds of wrong things and created a country or, you can say the whole world, full of lots of problems arising out of religion. How can it be that religion makes you hate somebody? Religion is there to understand love, imbibe love and compassion. So the third thing one had to do is the Adi Shakti’s job, that is the one Kundalini within us. And, by the awakening, we got pure knowledge, absolute knowledge, pure knowledge that it cannot be challenged. Absolute it is! Whatever you know after Realization is absolute. If you know that, then what you have to understand, that everything has to be united. You cannot have fights and you cannot hate anyone. If that thing starts happening, all the problems of the world will be finished.

So the first thing, redemption, that is the quality of the Adi Shakti, was to redeem people of their all wrong ideas about others. Firstly, as we know, there are six enemies we have got. And unless and until we can conquer those six enemies, we cannot be a religious person. That is what is said, but actually the all religions are based only on prospering those six enemies that we have within ourselves. When you see this clearly, you start seeking, you start seeking, seeking earnest truth, the Truth. And the revelation of truth, absolute truth, can only come through your evolution, through your reformation that you become person who knows the Truth.

For that, Adi Shakti’s ascent is important within you, which is your Kundalini. And when this thing takes place, automatically you drop all those six enemies that you have. You become a beautiful human being. Like lotus, when it is in the very germinating state, it looks like all other small animals, or small, you can say, very, very, small dirty things that are in the pond. And then, once it starts coming out, coming out of that horrible water, it becomes such a beautiful flower, rises up and opens out. In the same way, a Sahaja Yogi, though he lives along with all these horrible things that are going on, but flowers like a lotus. It doesn’t have all these insects, all this dirt and filth of that water in which it lives. It sucks only the pure water and the remnant, the others remain there as it is.

So what is left within you is nothing but purity, beauty and fragrance, just like a lotus. Then there is no more the problem of getting attacked by all of these small, small creatures in the water or all the dirty things that are in the water. And this state that you have achieved now, I’m very happy to see so many people in America have achieved it. You see, it’s a very great blessing, because America is the leading country in so many ways. One can say that it has made lots of money. That is not the criteria of becoming a very good Sahaja Yogi. What you get is the satisfaction, satisfaction that you enjoy whatever you have and whatever others have.

Note the 6 enemies of the Soul can be found here    https://www.academia.edu/31985324/SHRI_MATAJI_NIRMALA_DEVI_Six_Enemies