The Kundalini energy usually is in a dormant state in the sacrum bone, but not so in everyone. Some children are born with the energy flowing, sometimes it can be seen pulsating on their fontal bone, these children are usually well balanced people who have nice clear eyes and are often of a gentle disposition, they can be tearaways too, but you will know they have ‘something special’ about them, maybe a certain wisdom? obviously the Greeks new that this bone was special as they named it the ‘sacred bone’. The individual kundalini within each one of us contains a desire to meet with the collective kundalini, we could think of this as individual rain drops flowing back to the ocean. In that ocean they connected with the whole again. Get your connection.

The qualities of the chakras 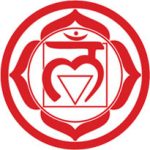 Mooladhara Chakra
The first chakra is situated below the sacrum bone in which resides the Kundalini, and its main aspect is the innocence. Innocence is the quality by which we experience pure, childlike joy, without the limitations of prejudice or conditionings. Innocence gives us dignity, balance, and a tremendous sense of direction and purpose in life. It is nothing but simplicity, purity and joy. It is the inner wisdom that is ever present in the little children, and gets sometimes clouded by our modern lifestyles. But it is a quality which exists eternally within us and cannot be destroyed, waiting to be manifest as pure joy when the Kundalini rises. 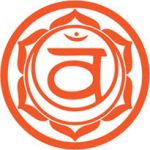 Swadishthana Chakra
The second chakra is the chakra of creativity, pure attention and pure knowledge. It is the one which connects us to the inner source of inspiration,
and enables us to experience the beauty around us. The pure knowledge given by this chakra is not mental, but it is direct perception of the Reality,
that can be felt in our palms and indicates our subtle blockages. Also this is the center of pure, steady attention and power of concentration.
On the physical level it looks after our liver, kidneys, and the lower abdomen. When we think too much, this center gets drained of energy and diseases like
diabetes or blood cancer can occur when this chakra goes completely out of balance. 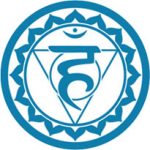 Nabhi Chakra
The third chakra is the one that gives us the sense of generosity, complete  satisfaction and contentment.
On the left side, the main quality of this center is peace – clearing this chakra can relieve stress and tensions.
On the right side, it looks after our liver which is the organ of our attention and power of concentration.

When enlightened by the Kundalini, the Nabhi chakra gives us our spiritual ascent, a true sense of what is right and wrong, it brings an inner sense of morality which doesn’t come from a particular religious teaching but is a universal truth a complete truth which brings about an inner balance at all levels of our life.

Surrounding the second and the third chakra is the Void which stands for the principle of mastery (guru principle) within us. In many spiritual traditions, this area is the “ocean of illusions” that needs to be crossed with the help of a spiritual guide. When the Kundalini is awakened and  passes through the Void, this principle of mastery is established within us. Thus, as Shri Mataji says, in Sahaja Yoga you become your own guru, your own spiritual guide since you can feel on your fingertips all your subtle problems and have the power to cure them using your own Kundalini. Moreover, establishing this center helps us get rid of all our habits, laziness, gross attachments, and everything that enslaves us in a way or another: we become our own master. Following false “gurus” who are more interested in power tricks or your purse can damage very much the Void area. But after Self Realization, everything can be cured through the purifying power of the Kundalini in meditation.fusion_fontawesome icon=”fa-film” size=”26px” flip=”” rotate=”” spin=”no” alignment=”left” hide_on_mobile=”small-visibility,medium-visibility,large-visibility” class=”” id=”” circle=”no” iconcolor=”#d18b00″ circlecolor=”” circlebordercolor=”” animation_type=”” animation_direction=”down” animation_speed=”0.1″ animation_offset=””][/fusion_fontawesome]Shri Mataji Nirmal Devi describes the feminine side of this Chakra – see video Ancient drawing of the chakra systemAncient drawing of the chakra system 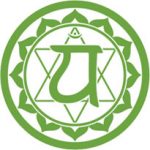 The Heart Chakra or Anahata Chakra
The fourth chakra, the chakra of the heart, is the place where resides our Spirit, our true Self, which is eternally pure and unaffected by anything, like a shining
diamond hidden within us which witnesses all our actions. After Self Realization, our attention becomes for the first time connected to our Spirit and we gradually become aware of it. Our misidentifications with our ego or conditionings drop and we start becoming identified with our Spirit, which is our true nature. On the physical level, this chakra looks after our heart and lungs – if affected it can cause asthma or various heart conditions.
It is from our heart that the compassion and love manifests, and also the heart chakra is the one that gives us the sense of responsibility and pure behaviour towards others. The heart chakra manifests in the center (at the level of the sternum bone) as complete security and confidence.
All our worries, doubts and fears are destroyed when the heart chakra is fully enlightened by the Kundalini.

Vishuddha Chakra
The fifth chakra is the chakra of diplomacy, of pure relationships with others, and of playful detachment. It removes all our guilt and remorse when it is opened by the Kundalini, and gives us a kind and compassionate voice.
The tendencies to dominate others or to feel dominated by others, the feelings of superiority or inferiority and all jealousies are removed when this chakra is
nourished by the Kundalini. Also, the Vishuddhi is the chakra which gives us the connection with the whole, enabling us to feel our oneness and the fact that
we are all part and parcel of the whole.

The Agnya Chakra
The sixth chakra is the chakra of forgiveness and compassion. Forgiveness is the power to let go of anger, hatred and resentment and to discover, in humility, the nobility and generosity of the Spirit. It is the one that dissolves all our ego, conditioning, habits, false ideas of racialism, and all our misidentifications.
It is the narrow gate which opens the way for our consciousness to ascend to its final destination, which is the seventh center. Roving eyes, watching impure things, or self-centredness damage this chakra. Watching the sky, earth or nature can help cleanse it. 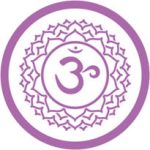 The Sahasrara Chakra
The seventh center integrates all the chakras with their respective qualities. It is the last milestone of the evolution of human awareness. Nowadays, we are at a level which corresponds to this chakra, and our consciousness is able to easily enter into this new realm of perception, which is beyond our limited mind and concepts, and which becomes absolute at the level of the Sahasrara. This chakra gives us the direct, absolute perception of Reality on our central nervous system. This is precisely what is achieved by Self Realization, through the spontaneous awakening of the Kundalini given by Sahaja Yoga.
The workings of Self Realization and subtle aspects of the chakras and channels are too extensive to be explained here. They are part of a knowledge which is not only to be studied at the mental level, but to be experienced directly. This new level of consciousness can be achieved after Self Realization, through the regular practice of Sahaja Yoga meditation techniques that are taught, always free of charge, in over 75 countries around the world.

Shri Mataji Nirmal Devi describes the Sahasrara Chakra Centre which is the accumulation of all the other 6 centres – see video.