Male and Female are the two wheels the same Chariot, they carry the ‘whole’ forward 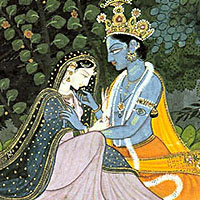 The Hindus have the exact same principle or archetype, the female is the Shakti, the famine the one that nourishes or supplies the energy, it’s like the Mother Earth, we put the seed into the mother earth, the seed grows, it’s all done in an unseen modest way, everyone admires the outcome, the flowers but the mother earth does all the unseen work. The mother is the Kinetic energy and the male aspect is the action, the male is the doer, the Shakti is always the support without the support there is no outcome no action.

The idea goes beyond the mere physical difference between men and women, although with all these things from religious books including the Bible most people prefer a ‘gross’ idea rather than to encompass the totality of their essence. The male was created to be joyfully and active. The woman was created to joyfully and to give nourishment and strength. Each was created with a unique role and responsibility to be the perfect counterpart to the other. One is not better or worse than the other, each are created equally as a response to equal and opposite forces attract and work together, they work like a magnet to pull in one direction, like the two wheels of a chariot. The two aspects of the individual, the famine side and the masculine side. The desire and the action, the yin and the yang, the sun side of our personality in action and the passive side, the moon aspect, which is symbolic of our passive side represents our emotional intelligence, the love, the caring, the nourishing. The opposite is the masculine side, the logic, mathematics.  Individually we also have all these aspects, we do not have to talk of two separate people we can apply this philosophy to the individual. At birth we are born male or female, within the male or the female these aspects very, usually the male is more in the activity side and the female more in the emotional side, the qualities of the masculine are usually stronger in the male the qualities of nurture are usually stronger in the females, that is not to say that it is always so, obviously and invariably there are those that do not wish to recognise that there is a difference between the sexes and some would say there are no differences. If we look at all the different cultures world wide it would seem to be the case that the female is the nourishing power and the male is the action power, I am definitely not saying one is better than the other. We all have these same qualities in ourselves as individuals.

“Therefore a man shall leave his father and his mother and hold fast to his wife, and they shall become one flesh.” (Genesis 2:24)

The male leaves the protective sphere of his household of origin to become the protector of a new household (Genesis 2:24). The woman doesn’t “leave.” She’s the constant beneficiary of protection from the authorities God has put in her life. The Lord wanted to ensure that woman, His final delicate masterpiece of creation, would always be loved, cherished, and kept safe.

When we think about roles, we often make the mistake of thinking that they are primarily about what we do. Roles influence what we do, but the role does not define who we are, nor the other way around, or behaviour does not define our role. Most People miss this point when they engage in endless debates about specific behaviour related to men or women, like whose job it is to take out the rubbish and who’s turn it is to do the washing up, cook the meal, these are not set in any religious philosophy and should not be used to control either sex. Most people like to look for markers which suite their mind set whatever their culture, there are those that like a ridged list of do’s and don’ts. Some religious philosophies which are ‘man made’ and have been taken out of context have put  control in them by male writers. The living word is with the people, the Religious books such as the Bibles of most of the world religions, all are written at best 50 years or more after the Incarnations or Prophets gave the word to the people and though there is much truth in these writings they have also been altered for gain be that power or money.